If you like reading hi-tech news and consumer electronic reviews, you might have stumbled upon the 5G abbreviation. It’s often used in the articles about home Wi-Fi networks and mobile networks. The only problem is that 5G can mean two completely different things. Don’t panic, we’ll help you to tell them apart and give you some perspectives of these technologies.

Wi-Fi 5G stands for 5 GHz – this is the frequency that many routers work on now. Check yours and see if it has an 802.11ac range in the manual. If the answer is ‘yes’, then your router supports the 5GHz band and you can watch UltraHD video streams and play high-demand games online.

The 5 GHz band allows a higher density of home users. The only roadblock here is the capability of end devices supporting the 802.11ac range. A list of such devices includes MacBooks, iPhones, iPads, most of Android phones and smart TVs.

Usually, home 5G routers are dual-band ones and use the 2.4 GHz frequency as well, so that you can hook up older devices. These routers are also a bit more expensive than the single-band ones, but it’s worth it to have a fast and stable home network. How fast can it be exactly? It can hit the 1 000 gigabit limit.

On the other hand, when 5G is talked about in reference to mobile networks, it is a completely different story.

For now, we have GSM and much faster LTE networks. LTE is often labeled 4G and here G comes from Generation. So, 5G stands for the 5th generation in the mobile networks context. Having the 5G mobile network would be a blessing.

Due to the wave length quality we would get better coverage and low latency as well as low energy consuming. It’s an ideal solution for the IoT, since many of the connected things are mobile and will be mobile.

Japan, Southern Korea, China and the EU have been working over the 5G projects and testing the equipment in the rural areas. The whole communication equipment should be re-designed to achieve the goal, and the project is soaking billions of dollars the way sand soaks water. For instance, Google is paying $1,000 a day testing the new technology in New Mexico. 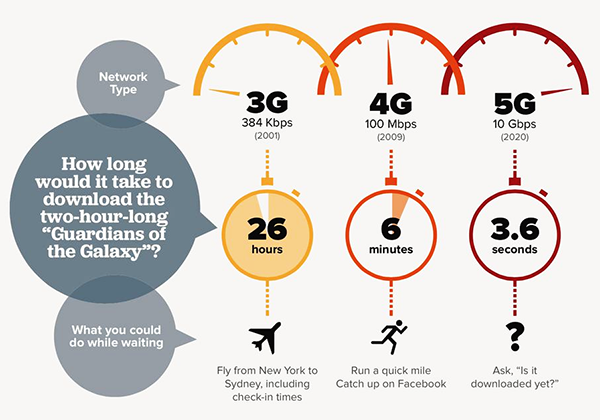 SkyBender is the offspring of the Virgin Galactic’s delayed spaceflight program. The internet empire is using solar powered drones and an occasionally piloted aircraft to raise the 28GHz radio transmitters in the air and deploy the 5G network. The agreement has been signed with the FCC for the use of the 28GHz band. (The U.S. Federal Communications Commission (FCC) approved the 28 Gigahertz, 37 GHz and 39 GHz bands for 5G the spectrum on 14 July 2016.)

Ok, you can say, but if Google is testing the 5G network, who exactly is using it right now? There are no 5G phones in the stores!

Actually, 5G is just round the corner. With the high quality content growing exponentially, the carriers are very interested in the more capacious networks. The 5G networks are expected at the time of the 2018 Winter Olympics Games in Korea. It gives us just a year and a half from this day. Qualcomm, Intel, AT&T, Sprint and T-Mobile announced about their investments into the technology, while Verizon plays its own game and is testing the proprietary 5G standard.

The last thing we need, though, is the war of standards. Will the 4G network retire as well? The first 5G Snapdragon X50 chip will be able to connect to both 4G and 5G. So we’re going to live through the adaptation period during which both networks will be working. Asian countries will surely be the first to test the new communication standard in the everyday life. The USA and the EU will follow.

Here’s the list of companies that will support 5G networks by 2019.